2012 is directed by Roland Emmerich, the same guy who brought us Stargate, Godzilla, Independence Day and The Day After Tomorrow. All monumentally successful movies, bringing high-tech effects and epic storylines to the silver screen—but nothing that compares to the monstrous overkill that is 2012, a movie that has already cleaned up at the US box office. Internationally, reviews have ranged from mixed to negative. 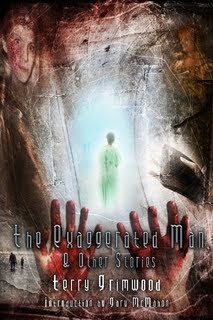 Terry Grimwood’s self-published, powerful collection of nineteen short stories (all previously published elsewhere) blazes with confidence. Guilt, retribution, sex and money are all magnified under Grimwood’s lens and evil—both ancient and new—glints in his darkness. A wallet holds the key to our soul’s secrets, a pastor’s journey to heaven becomes the gory reality of life after death and a nightmarish ruling, mired in political correctness finds Death Doctors stealing bodies from the LiveScum so the immortal dead can feast on the vulnerable living. These are dystopian predictions and cautionary tales of moral and social ineptitude where technological advancements have forgotten the innate instincts of human nature and money has become a currency of greed and fear rather than pounds, shillings and pence.

A thread of perceived weakness links Grimwood’s main cast; often unable to speak their truth before it’s too late, incapable of stepping up to their responsibilities honestly, and powerless to resist the women of their downfall. But they provide strong foils for the underlying messages even if they themselves don’t always feel sustainable as stand-alone characters. The language is taut, generally well-edited and captures a variety of colloquial accent—from New Yawk drawl (in ‘The Friends of Mike Santini’) to the extraordinary half Dickens, half Alex DeLarge diction of London’s Bull Poor in ‘Nobody Walks In London’.

‘Breathe’ is a gem of a tale, calling to mind shades of Zamyatin’s We. The relentless march of progress over nature is removing all human biological functions and prostitutes are earning their crust by breathing into artificially modified clients. Social divide is represented by the choice to be a Breather (to live the old-fashioned way, sucking oxygen into human lungs) or a FullPerson (artificially respiring)—and the choice presented to Marko Denna is blurred by love, pressure and instinct. I defy anyone to read ‘Breathe’ and not find themselves dragging in delicious gulps of lovely, polluted air with a secret pang of relief. But oh, I wanted a novel of this, not a short story! There’s so much juice to unearth, so many interesting layers to investigate.

And beauty shines out of the titular story, ‘The Exaggerated Man’ (although I don’t want to tell you about it, I want you to read it for yourself). Something in the easy flow of Grimwood’s language, the clarity of his descriptions and the strong emotional tug suggest a vision closer to the author than fiction. I kept wondering what it could have been… a dream, or maybe shades of a private truth? This and ‘The Lowestoft Monster’ are two stories that, despite the pain of their subjects, truly stir the heart. ‘The Lowestoft Monster’ infers an ambiguous evil of our own choosing, never defined beyond recollections of words and moments and thus inflated to even more terrifying proportions when you realize the narrator himself is too scared to directly verbalize the image. We’re left to draw our conclusions, thus ensuring we’ll employ our own, individual perception of horror to fill the shoes of the dreaded Uncle Sidney with his seemingly innocuous stance and words.

Sadly, a couple of the shorter pieces failed to catch my imagination with the same force of ‘Breathe’. In contrast to the depth and texture elsewhere, ‘Dirty Stop-Out’ reads as no more than a wisp of an idea based on a punchline. I was left similarly cold by ‘Freedom’.

The disparate locations in both time and place across the breadth of the collection should feel unsettling but are saved by the consistency of Grimwood’s themes. Greed, suffocation and loss provide a strong heart beat. Suffocation comes in the form of mounting debts, social pressure and the more literal inability to breathe naturally. Men are confronting the systems that control them but losing out every time to the monster wielding ultimate power. These monsters are often lurking on the breeze or far off in dark shadows. They’re hiding beneath a veneer of public respectability or perhaps in the minds of their victim.

While I never tired of the book I would suggest a careful approach. Grimwood chivvies us from Mars to London, the seaside and back like a demented sight-seeing bus behind schedule. Such pulls are occasionally jarring—mental leaping requires a flexible imagination—so these are stories to be taken as individual treats. Lose yourself in the torment of the youth-slaughtering flu in ‘Coffin Road’ or the horrific bargain on offer in ‘Atoner’, but then step away, enjoy the lingering sensation for as long as your imagination will sustain the trip, then dive back in for a totally different experience.

My enjoyment of The Exaggerated Man and Other Stories urges me to leave the review at that—enjoyment. But Terry Grimwood doesn’t write stories without a sting in the tail so I must also be tempered by my less-pleasing thoughts...

Grimwood’s boundless imagination paints future worlds with prescient, disturbing skill but the most disturbing element is his inability to see women as much more than sirens, whores or weaklings. And this lazy gender stereotyping of the SF audience is as out of date as the ‘geeky’ perception of the genre as a whole.

The representation of women within this collection reveals an embarrassingly simplistic view of the roles of the sexes. Prostitutes are girls, winos are men. Men fall for foxy young mistresses with husky voices and beer-drinking ways while their dry, sneering wives read dull novels, and keep the house too clean. Women need trinkets to make them happy and men have to provide, even if that means selling their souls in the bargain.

In ‘The Exaggerated Man’, having touched death, Atwood begins to see life in horrifying, exaggerated detail. But it’s the women he encounters that become the most grotesque: ‘She was...dirty. Scraps of make-up clung to her face, her pores leaked fluids, her flesh was ingrained with muck of all kinds. She stank of sweat, semen, of other juices and excretions.’

Then it’s Avril’s intoxicating lure that leads Paul Wilde into trouble with the tough and demonic Mike Santini. In ‘Coffin Dream’ it’s Sarah’s breakdown that drags Tony into his life-threatening debts. In ‘Breathe’, Marko Denna endures the effects of surgical reformation to appease his nagging, violent wife, Karryann. In ‘John’, Cathy can’t resist the charms of her now-dead husband despite his violent and abusive history. In fact, she’s so weak-willed, even the realization that he’s become the devil isn’t enough: ‘She felt her selfsame pussy grow warm, despite the numbing shock. Despite disappointment which bordered on despair.’

Fat women are outcasts (Melissa) or cackling clowns (Diana), wives nag their long-suffering husbands, and beauty wreaks hellish, murderous havoc when a woman’s jealousy comes to town. Bosses’ daughters can be handy tickets to promotion and, in the rare case of being a ‘very powerful Erasman lady’ this lady in question is represented by the black mass of an enormous, hideous spider living for nothing but to breed and kill.

This veiled misogyny didn’t stop me enjoying the book but I certainly felt a tinge of detachment. It’s hard to engage when you’re clearly not the chosen audience—and that’s a shame. I’m not looking for a PC whitewash—just a writer as willing to flex his muscles against stereotypes as he is against the laws of earthly physics.